Immediately following breakfast Jill and I gathered our things and headed off for Tokyo.  We just missed the 8:50 bus, so we walked to Kumegawa.  This is our first trip into the city without children, but we are trying to get a lot accomplished in short order, and that is just not possible with children.  They will spend the day with Tak, Mitzi and Nancy, but I will get to their day later.  Fuji-san was visible again today.

The first stop on the whirlwind tour was Shibuya, a very lively section of Tokyo.  We grabbed some lattes at the Starbucks at Shibuya crossing and headed for Tokyu Hands for gifts and things one can only get in Japan.  Tokyu Hands is a famous department store chain and this particular store is built into three different buildings, so it has the weirdest floor layout I’ve ever seen. 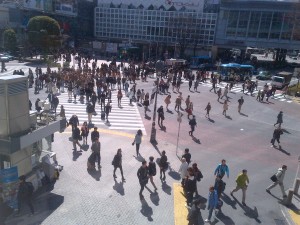 They also have a helpful guide letting you know how many calories you have burned by climbing the stairs.

There were definitely some interesting things to be had in the store!

After we got out of there, we took a 25 minute walk to what is reportedly the best coffee shop in Tokyo.  It was a little one man show in an old house, and the coffee was definitely the best I’ve had in Japan.  Coffee just isn’t a big thing here, and the only people there were foreigners. 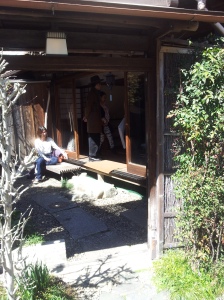 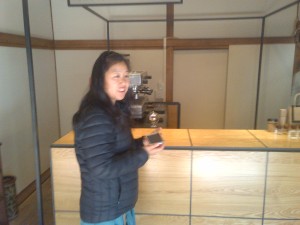 The next stop was Ginza for tea at LaDuree.  We had been there earlier in the trip, but high tea with our Girls just is not a realistic goal.  Jill was very pleased that we were able to make it for tea, which was excellent.  We were both so stuffed we couldn’t face buying anything to take away when we left.

From there we walked to Uni Qlo where Jill bought her usual 2 year supply of socks and underwear.  We also got some fun T-shirts for gifts.  I didn’t get anything.  I find it a tad depressing that I can barely squeeze into an XXL.

Back on to the subway to Asakusa again, this time we didn’t sight see, we just hit the gift shops and got what we wanted, though it took quite some time to find the Koi Noburi we wanted, and we never did find any good fu-rin.

Our last stop for the day was Akihabara.  Usually known for its electronic stores, Akihabara is now also developing into a centre for Cosplay and Anime related shops.  We picked up some highly inappropriate items from vending machines for a certain individual back home, and walked through a street marked with the most bizarre collection of memorabilia I’ve ever seen.  There was a mouse pad (see photo below) with very comfortable looking wrist support. 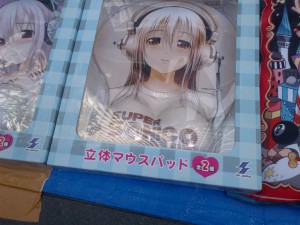 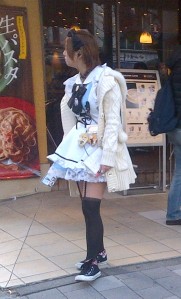 Akihabara is on the far side of Tokyo, so it took almost 2 hours to get back, including a brief top to pick up some food for dinner.  Sashimi and croquette again.  mmmm.

Miwa was having a nap when we got back, a sure sign they had had a fun day.  About an hour after Jill and I left, everyone else headed out for Seibu-Yuenchi, a nearby amusement park.  They stopped at the usual playground for a half hour or so along the way.

At the amusement park, much fun was had by the children, the adults argued and wore each other out.  At least that’s what I get out of their description of the day.

Miwa said some girl in the bouncy castle punched her in the face, and her favorite ride was the carousel. 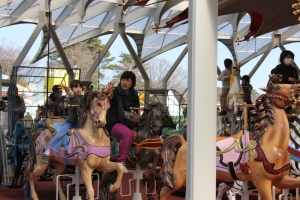 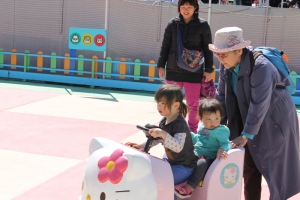 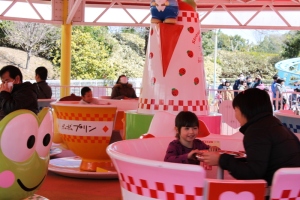 Miwa woke up an hour after dinner, and ended of staying up until 10, which is why I couldn’t get the blog out last night.