Ben has been remiss in posting here so….

here are the links!

Hotaru woke up at 4:30.  There is just no way to explain to her that it is not time to get up yet.  If she is up, she figures everyone else should be too.  Jill took her to the bath for an hour, so Miwa managed to sleep until 5:30, but it feels like we are not making much progress on getting to a normal sleep pattern.

Once we were all up, we went down to the furo (again) for a nice family bath.  It is a really nice spot, and I want one in the back yard, but I’m not quite sure how to pull it off.

Breakfast was a traditional Japanese style, which meant an uncomfortable attempt at dining cross-legged for me.  Oh well, the food was excellent.

We packed up and headed out on the subway for Asakusa, a popular tourist destination in Tokyo.  Jill, Miwa and I have been there before, but Masumi and Nobu had never been.  It is always worth a visit anyway. 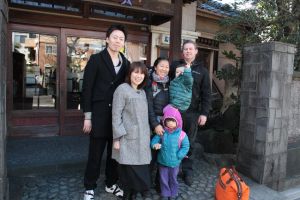 A brief stop for coffee turned into an impromptu nap session when both girls fell asleep. 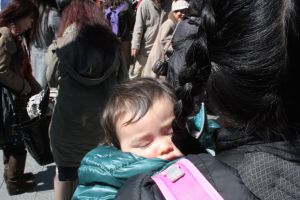 Eventually we gave up waiting for them to wake up and decided to just pack them around, though Miwa woke up when we tried to put her in the back pack, and once she saw the big lantern at the Kaminari-mon (Kaminari Gate) to Sensoji, the temple that is the main attraction to the area, she pricked right up, so she got on the piggy back rider and Ru was transferred to the back pack.

Sensoji was as packed as it has been every time I’ve gone there, and Miwa had a blast looking at all the tourist junk.  Jill got her dose of amazake, much to her delight. 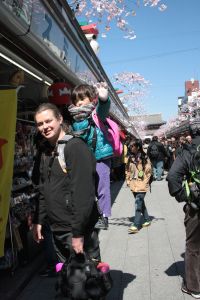 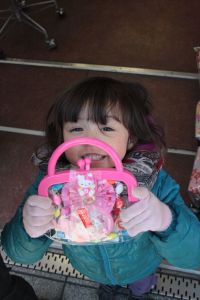 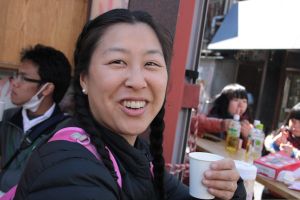 There were a lot of shockingly short skirts and shorts, I couldn’t figure out how to take any pictures without coming across as creepy, so it you are interested in such things, just do a google image search for “short Japanese skirts”.

On the way out we stopped at a playground occupied only by pigeons and a homeless man.  The apparatuses were constructed entirely of metal and I kept having visions of knocked out teeth, but it is the kind of thing I loved when I was a kid, and clearly the girls had fun on it.

We had ramen for lunch, then wandered around the area looking into the tourist trap shops.  Jill picked up some sembe (rice crackers) from a shop that toasted them by hand on site.

Then it was time to go to our next destination, visiting Jill’s home-stay sister from when she was an exchange student.  First we had to go back and get our bag from Nobu’s car.  We waited in a playground near the subway station while he walked back to get the car.  Once again, the only occupants of the playground were pigeons and a homeless man.

Our route re-traced most of our trip to Asakusa.  In retrospect, we should have just packed our bag and left it in a locker somewhere.  Ah well, live and learn.

Satoko picked us up at the station and we were surprised to see that she was very pregnant!  It turns out she is already 2cm dilated and is due at any time.  There may be baby pictures on the blog before we leave Japan.  It was surprising since she already has 3 children, and even that many is a lot for Japan.

Her house is pretty typical for Japan, tiny and shoe-horned in amongst the others in the neighbourhood.

I headed out with Satoko and her husband Tatsuya to get some groceries, though we ended up getting more alcohol than anything else.  I was tempted to get some of the bulk Sho-chu, but the stuff is generally vile, so resisted.  Still, it is a neat concept, bring in your bottle and re-fill it.

I ended up having a fair amount to drink, at least 2 bottles of wine, but I made sure to drink lots of water too, since I had no desire to be hung-over while transporting two kids on the subway with a less than sympathetic wife.  My drinking partner fared less well and reportedly passed out on the living room floor just after I called it a night.