Snow to Surf among other things

It’s been a while since we posted, and things have been afoot.  Not the tasting room reno that is supposed to happen before we open (I’m procrastinating) or the guest blog I’m supposed to do for another blog, but things like Snow to Surf (yay, we didn’t capsize and yay, we weren’t last!), moving a vineyard and getting going in the garden.  Also things like horse riding lessons and more sickness.

The Jaunty Jeggings have participated one more year in Snow to Surf and we weren’t last, actually we climbed out of the bottom 10 this year!  Yowza.  We do the canoe leg and I thought it was worse this year because I got soaked and I didn’t last year but it could have been the combo of tide and a headwind and being hit broadside by waves.  Oh well.  We saw a couple of boats dump over and there were reports of other canoes dumping over at the launch area but I didn’ t see it as I did the running bit of the canoes leg this year.  Man am I out of shape for running.  Canoeing was fine but the running…gah.  It was more of a slow jog, however a lovely friend took these pictures and ran with me most of the way and I’m ever so grateful to her:) 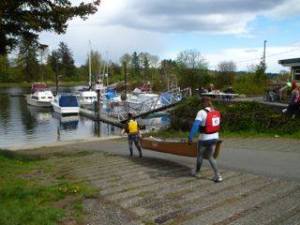 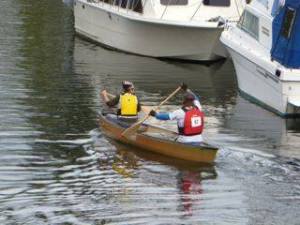 We’re moving our foch vineyard because it is oriented the wrong way and was too close to the southern fence line so doesn’t get as much sun as it should, so we’ve been poking away at that.  All the wire and fence posts are gone now and half the vines have been transplanted.  We’ll see how they do this year.  It might be a bit late to transplant them now, but what can we do.

I finally got into the garden with R, our next door neighbour.  For those who don’t know, we do a sort of communal garden between R, Ben’s parents, my parents and ourselves.  We all help with weeding and planting and we all reap the rewards.  Granted the last few years I haven’t been on the ball with the garden but perhaps this year is the year.  I’ve got squash, tomatoes, peppers, cucumbers started already but I’m feeling further and further behind.  We did get a row of potatoes and some onions in the garden today and I finally planted all the garlic I was saving last week.  Gradually we’ll get there.

There’s also the horse riding lessons we started at Balance Equestrian Center in Campbell River.  This week was lesson #2 and can you see the grin, (it’s a bemused one, I didn’t get the really big one)?  Ben sighed when he saw it and predicted he’ll be working up in in the Tar Sands for a few more years.  Miwa LOVES it.  Whooo boy does she ever.  Ru-chan just wants to pet the horses.

Now I’m sick, the girls are sick, Ben is sick and my ears are stuffed so I can’t hear a thing.  Ah well, such is life. Goopy eyed chick is fine now but I’ve had a sick chick by the woodstove for the last few days and through experience I knew it wasn’t going to make it.  I kept it hydrated and fed it as best I could but today it died.  So I saved one and I lost one.  We moved the meat chicks out to their coop on Sunday and they are happily pecking away at the grass.  We went the route of a semi movable chicken coop, I don’t like to move it much because we inevitably squish one or two during the move.  What we do is move the attached outdoor cage to new grass.  At this age though it takes them a while to peck down grass.  The important thing is that they are happy and wandering freely in their pen.  Once they get bigger I can take the pen away and let them really free range.  Too many crows and eagles right now, who knows how many we’d lose!

I’m reading Chris Hadfield’s An Astronaut’s Guide to Life on Earth and it’s pretty engaging.  I loved following him on Twitter when he was on the International Space Station.  I was leary of the book because it seemed to capitalise on his newfound celebrity (though that is what happens, cash is king) but it’s turned out to be a good read.  I especially like his thoughts on a minus one, zero or plus one person.  I have often had the same thoughts and I concur;  I will always aim to a zero.  Sounds negative but you have to read the book to understand.  It’s rather uplifting.