Today we headed off for Japan’s wine growing region.  We got out of the house just before 9 and made our way via bus and train to Kofu. 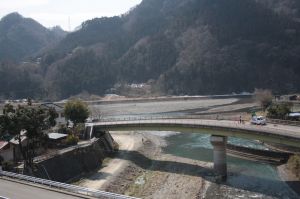 We stopped at Enzan station and hopped in a cab for the short ride to Okunota Winery, the smallest we could find on the internet at approximately 5 times our volume.  There was a smaller one but it was too far for us to get to even though it was about our speed.  It is still a relatively small operation in that only the owner, his wife, and two employees work there.  The whites were pretty nice, made, but the merlot we tried was a little too acidic for Jill and my tastes (‘cause you know, we’re wine snobs!)

The tasting room is the little “log cabin” on top. 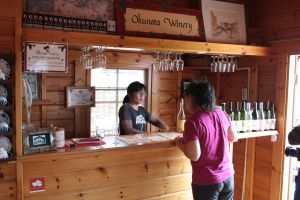 They have some interesting challenges in growing grapes here.  It is a monsoon climate, meaning they get a lot of heavy precipitation in the summer months, particularly during sensitive times like bloom.  The high humidity also causes a lot of mildew problems.  However, they harvest their Chardonnay in early september, and the Cabernet Sauvignon by late September to early October, so getting enough heat is clearly not a problem.

Most of the wine in the region is the Koshu grape, a variety that has been grown in Japan for about 1000 years.  It is grown in an overhead trellising system so very different from what we are used to.  I paced off one vine and estimate that it covered 300 square meters (3200 square feet) compared to the 3.75 square meters (40 square feet) devoted to each of our vines.  The stems on these vines are huge too, more like trees, really.  The more recent vinifera imports are grown in more traditional wine trellising styles.

We made a brief stop at a Shinto shrine.

Our hotel for the night is a traditional ryokan, like the one we stayed at in Tokyo, but this one also had a natural hot spring, well, at 28C, more like a warm spring.  Fortunately the water was also heated up. 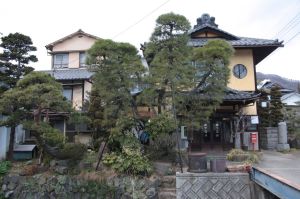 The ryokan is located just at the base of the hills that form the edge of the valley, so we were abel to walk up into some very steep vineyards and orchards.  There was also an old shrine (Shinto) and an old temple (Buddhist) located nearby. 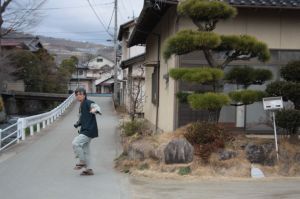 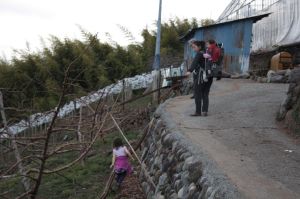 Dinner was quite the event, there were many, many dishes.  All of them were beautifully presented and delicious.  We ate from 6:30 until 8:20. 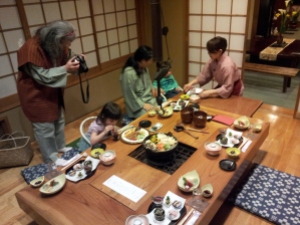 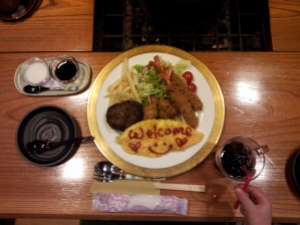 After dinner, Jill, the girls and I went to the hot spring for a bath.  It was really old.  The first part was built in Meiji 8 (1875) and the baskets we used to put our clothes in while we bathed were 80 years old. 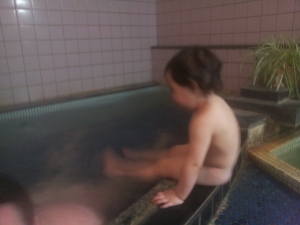 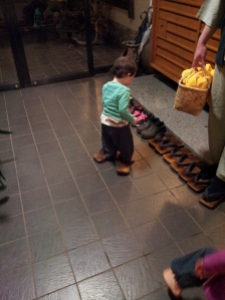